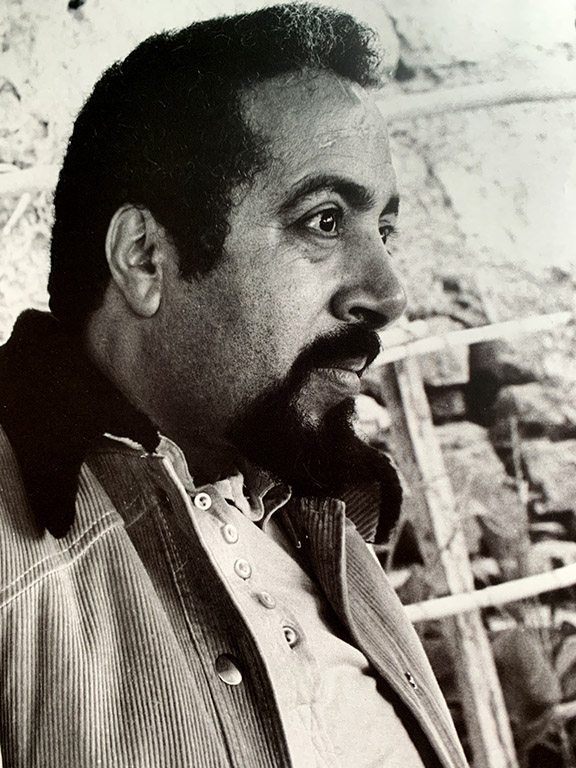 Chabâa was born in Tangier in 1935. After obtaining his diploma from the School of Fine Arts in Tetouan in 1955, he joined the architectural department of the Ministry of Youth and Sports, in Rabat before to obtain a scholarship from the Italian government for the continuation of his studies, at the Academy of Fine Arts in Rome. He will stay there from 62 to 64 and will be marked by the European avant-garde in the painting of the time. This will be manifested by the search for a form of lyrical gesture in his works. Back in Morocco, he taught at the Ecole des Beaux-Arts in Casablanca from 1966, where he applied with a group of colleagues to put into practice his new research based on the identity / modernity dialectic in Moroccan creation. In 1968, he founded Studio 400, in Casablanca, a design and interior design workshop, which will change its name upon its expansion in 1974 to become Studio Shine. Always keen on teaching, Chabâa will provide a regular plastic arts workshop at the National School of Architecture in Rabat from 1982 to 2009, and will hold the position of director of the National Institute of Fine Arts in Tetouan, from 1994 to 1998. It will thus have marked the minds of several generations of artists and architects, some of whom have today achieved international renown.

Of all our painters, Chabâa was the first to develop a discourse on modern painting by writing a regular column from the 1950s on to the Arabic-speaking daily Al Alam. Founding member of the Union of Writers of Morocco (UEM), he held courageous positions on the identity of Moroccan painting in the review Souffles and was virulent when he got old to “impose” a painting which emerges from the shackles of a certain post-Protectorate Morocco.

True living awareness of Moroccan creation, Chabâa has been involved in all the fights that have marked our modern painting. He therefore campaigned very early on for the creation of spaces and art galleries and called for an integration of art into the urban space for accessibility to the greatest number. This is evidenced by the many panels produced in collaboration with the architect Patrice De Mazières from the end of the sixties, as part of large public equipment projects. Handling the pen and the verb with the same ease as the brush, Chabâa advocated the theoretical and didactic support of plastic action by holding meetings and round tables, giving rise on occasion to writings in the form of of booklets distributed to the public. He will thus have animated many conferences in Morocco as abroad, in a concern of popularization of the questions of art and its role in the company and the lived of the individual. Alternately gestural, geometric or lyrical, Chabâa’s painting is dominated by abstraction and will experience a notable evolution throughout his career, with some key stages (80s) resulting in quasi-metamorphoses and a new lease of life. in his work as a painter.

Endowed with a keen sense of commitment and aware of the artist’s social role, Chabâa has published numerous writings on Moroccan painting. His book, The Visual Consciousness in Morocco, published in 2001, in collaboration with the Union of Writers of Morocco (UEM) places him in the rare category of theoretician painters, who are not content to devote themselves to their vocation, but to explain, popularize, and denounce the shortcomings of an evolving plastic movement.

Chabâa was decorated in 2008 with the Wissam of the Officer Order by King Mohammed VI and received several distinctions, including a decoration in 1991 of the Order of Merit of “Commandatore” (Commander) of the Italian Republic, following the work made at the mosque of Rome with Moroccan craftsmen. He passed away on July 24, 2013, in Casablanca leaving behind his wife Fatima and their four children: Issam, Nadia, Tarik and Quds. He lies in peace in the Acchouhada cemetery in Casablanca.

© 2022 CHABAA. Created for free using WordPress and Colibri
Scroll Up