This intervention will gain momentum in the argument concerning the visual arts and pan-Arab identity. However, I will tackle the subject – ignored for various reasons – of “popular arts and crafts”, qualified as crafts in Morocco. The subject has already been broached here under the theme “Plastic arts and pan-Arab union”, but it has only been dealt with in terms of popular activity in the Arab world. However, this type of national expression plays a preponderant role at the level of the pan-Arab union and the unification process. I will close my intervention by exposing the question of architecture in the Arab world based on concrete experiences. This argument on the plastic arts unfolds as follows: “Plastic creation, with all its expressive richness and in all its forms, moves within an Arab culture characterized by a great polarization between tradition and modernity. , the me and the other. Between cultural and intellectual practices, the plastic movement is exposed to the great challenge of the West at all levels. It owes its emergence and its evolution to the unequal historical encounter between Arab society and Western modernity in its most hegemonic and alienating expressions ”. 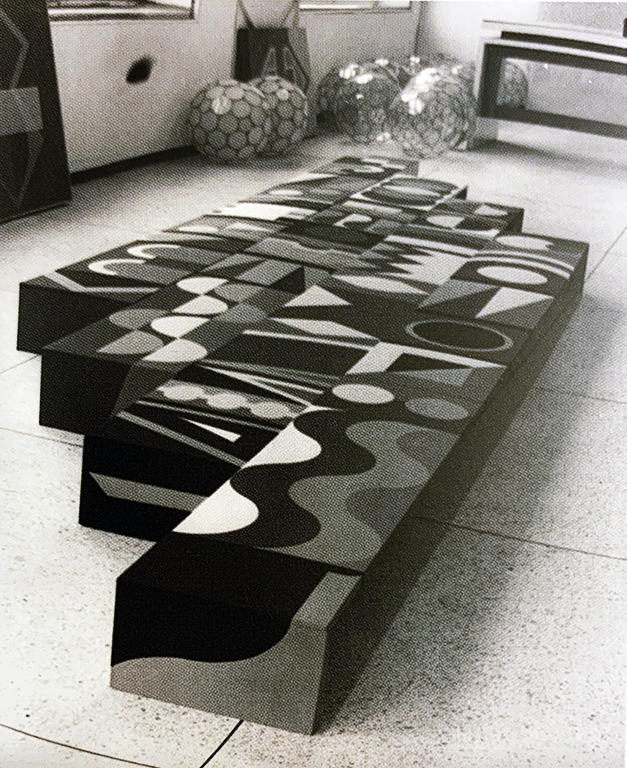 Modern research based on traditional elements. 1971

This remark can also be valid for the other fields of expression. However, with regard to the plastic arts in general, we approach this point by renouncing traditions as an original plastic activity, in the sense that we are only interested in the appearance of this plastic phenomenon in self. Here, we are talking about the phenomenon of easel painting as a new style of expression practiced by Arab artists in the context of their contact with the West and from their training in the benches of European schools, which generally based on Western academic programs. However, it is perilous to confine Arab plastic art in its only relation to the West and to forget that it saw the light of day long before easel painting. There is no doubt that our relationship with the West is significant despite all the forms of alienation that we know. This is a report that embraces other areas of great need for us. We have certainly learned a lot from the West, but this learning has been linked to our Arab-Muslim heritage and consequently, we have achieved a great deal of intellectual autonomy for which we take full responsibility.

Another point addressed by the argument and on which I would like to dwell appears in the following lines: “We notice that Arab artists, after they have gone beyond the stage of direct contact with the West and after they have practiced and experienced his different artistic movements and currents, live in a state, called by some “the third stage”, that is to say the stage where the artist engages in the social, intellectual and politics of his nation ”.

Indeed, the Arab artist who begins to revisit his training, thereby reaching – as we have already pointed out – a maturity to which he will have devoted his creative potentials, is making a return to his own plastic heritage. The latter is in no way embodied in easel painting, but rather appears in the popular arts, in cities and in the countryside, in the form of drawings, wood or plaster engraving, etc. It would be a mistake to consider that this craftsmanship is exclusively decorative, because they are expressions of plastic values ​​whose immense wealth was the subject of an awareness by painters. As such, it seems important to me to cite the experience of a group of Moroccan painters from the School of Casablanca and which is currently referred to in critical or historical writings by the “Casablanca Group” or the “Group. 65 ”.

This Group was confronted with an academic problem of great importance: the realization that, bearing a certain thought, the teachings they transmitted to the students had to permeate them in the long term. It is for this reason that they tried to integrate models from heritage, such as Berber jewelry, painted or chiseled materials. Taking this experience as a basis for reflection, we have always tried to answer the following question: How can we link modern plastic training to traditional plastic expression in our country? It goes without saying that artisanal work is, at the base, collective work. Of course, it is directed by a “Maallem” who provides a general plan, but the work itself does not bear a signature because it is collective. We tried in the Casablanca experience to transmit this spirit of collective work to the students, because such a spirit also includes a cultural dimension. The activity of artisans was not limited to artisanal work; they received poets in their stalls to discuss a poem, they organized meetings on the art of “Malhoun” and exchanged jokes … It is this cultural dimension that we tried to develop when we created the Moroccan Association of Plastic Arts (AMAP). We insisted on the importance of collective work through an exhibition organized in public places (Place Jamaâ El Fna, in Marrakech and Place du 16 novembre, in Casablanca, in 1969). Close links were also forged with writers when we participated in the creation of the review Souffles in French and later in Arabic. I am presenting here a particular experience where the actors worked to integrate modern plastic art into the Moroccan cultural land, while knowing that there are other Arab experiences having had this same objective. Regarding the theme of pan-Arab identity in Arab plastic art, it seems to me that this identity is not a watchword. The nuisance would come mainly from this dependence imposed on the plastic arts by certain political parties in power and which had the effect of transforming Arab plastic art into a kind of folklore. Arab identity, in my opinion, cannot be reduced to an identification of painting with slogans and facings devoid of any authenticity. On the other hand, it manifests itself in the creative act and intrinsic to painting as in the revelation of the treasures of Arab memory. 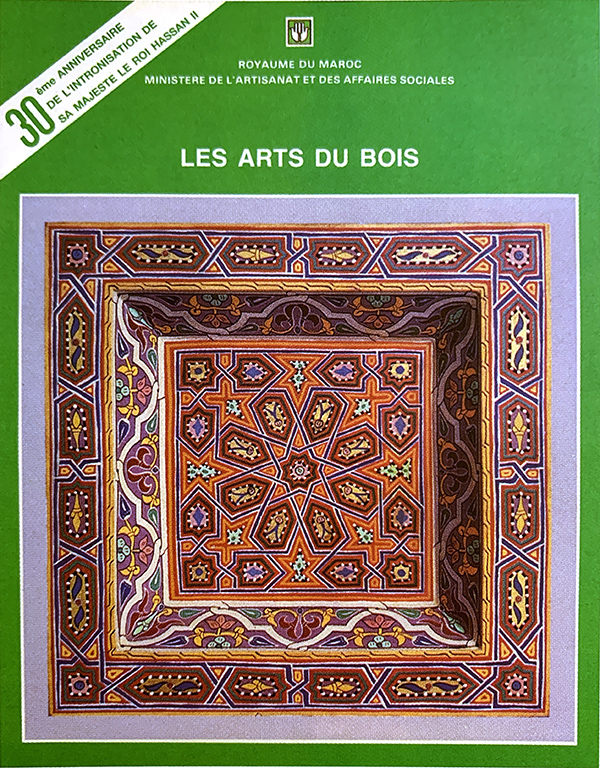 Publication of the Ministry of Crafts and Social Affairs. Design Chabaa.

The same is true of the so-called folk arts, even if it concerns another aspect to different degrees. These arts are endangered in several countries, with the exception of a few Arab countries, including the Moroccan and Tunisian cases where popular arts and crafts are advanced and enjoy a prominent place in society. I also noticed that in a city like Baghdad, the old medina was once distinguished by its popular and traditional spirit, which made it a real living museum. However, large avenues newly traced have succeeded in transfiguring it, under the pretext of widening the roads to create passages suitable for the circulation of automobiles. Actions which imposed an architectural style foreign to the surrounding symbolic heritage. Obviously, it is not enough to call for Arab authenticity when the powers that be in the Arab world tend to destroy what they claim to be defending through the media. In order to help painters and architects in the Arab world to protect themselves from their authenticity, to devote themselves to research and to develop a modern and futuristic identity, it is imperative to list historical monuments and to enact laws likely to protect them against all destruction and perdition, to safeguard in the same way the trades in the process of disappearance and to provide them with the necessary financial support, in the form of credits. It is also essential to set up specific congregations and factories adapted to the know-how of craftsmen to revive these trades which we consider to be one of the richest artistic heritage. As for the architecture, I take the opportunity to send warm greetings to a great Arab artist: the eminent professor, Hassan Fathi. It is through his work that we can understand the philosophy that corresponds to our interests and our current debate. How many opportunities have we lost to realize authentic Arab architectural projects, imbued with our Arab identity! I will cite here, by way of example, the monumental projects carried out in the Gulf countries by foreign architects.

© 2022 CHABAA. Created for free using WordPress and Colibri
Scroll Up